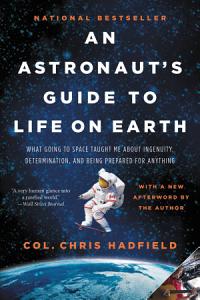 An Astronaut s Guide to Life on Earth

Colonel Chris Hadfield has spent decades training as an astronaut and has logged nearly 4000 hours in space. During this time he has broken into a Space Station with a Swiss army knife, disposed of a live snake while piloting a plane, and been temporarily blinded while clinging to the exterior of an orbiting spacecraft. The secret to Col. Hadfield's success-and survival-is an unconventional philosophy he learned at NASA: prepare for the worst-and enjoy every moment of it. In An Astronaut's Guide to Life on Earth, Col. Hadfield takes readers deep into his years of training and space exploration to show how to make the impossible possible. Through eye-opening, entertaining stories filled with the adrenaline of launch, the mesmerizing wonder of spacewalks, and the measured, calm responses mandated by crises, he explains how conventional wisdom can get in the way of achievement-and happiness. His own extraordinary education in space has taught him some counterintuitive lessons: don't visualize success, do care what others think, and always sweat the small stuff. You might never be able to build a robot, pilot a spacecraft, make a music video or perform basic surgery in zero gravity like Col. Hadfield. But his vivid and refreshing insights will teach you how to think like an astronaut, and will change, completely, the way you view life on Earth-especially your own. 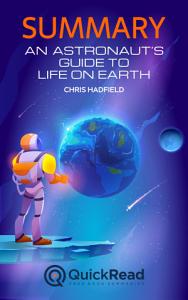 Do you want more free book summaries like this? Download our app for free at https://www.QuickRead.com/App and get access to hundreds of free book and audiobook summaries. What Going to Space Taught Me About Ingenuity, Determination, and Being Prepared For Anything. Becoming an astronaut is a childhood dream of people all over the world. Being able to leave Earth, experience zero-gravity, and float among the stars is something only a few people in life are lucky enough to experience. Chris Hadfield is one of the lucky few. After logging nearly 4,000 hours in space and spending decades training, Chris has plenty of stories to tell and lessons that he’s learned. The secret to his success and his survival can boil down to one unconventional philosophy he learned at NASA: prepare for the worst. You see, preparing for the worst sounds negative and pessimistic, but for an astronaut, preparing for the worst is a matter of life and death. Throughout An Astronaut’s Guide to Life on Earth, Chris Hadfield aims to teach his readers what he’s learned through his time in space. The lessons from space can be easily applied to life on Earth, no matter what you do for a living. As you read, you’ll learn how thinking like an astronaut can help you find peace of mind, how there is no such thing as over-preparation, and how landing a capsule from space is nothing like landing a plane. 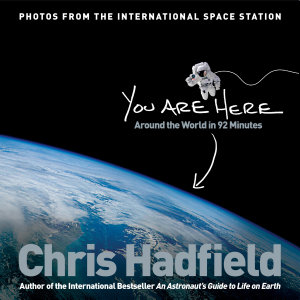 In You Are Here, celebrated astronaut Chris Hadfield gives us the really big picture: this is our home, as seen from space. The millions of us who followed Hadfield's news-making Twitter feed from the International Space Station thought we knew what we were looking at when we first saw his photos. But we may have caught the beauty and missed the full meaning. Now, through photographs – many of which have never been shared – Hadfield unveils a fresh and insightful look at our planet. He sees astonishing detail and importance in these images, not just because he's spent months in space but because his in-depth knowledge of geology, geography and meteorology allows him to reveal the photos' mysteries. Featuring Hadfield's favourite images, You Are Here is divided by continent and represents one (idealized) orbit of the ISS. Surprising, thought-provoking and visually delightful, it opens a singular window on our planet, using remarkable photographs to illuminate the history and consequences of human settlement, the magnificence of never-before-noticed landscapes, and the power of the natural forces shaping our world and the future of our species. 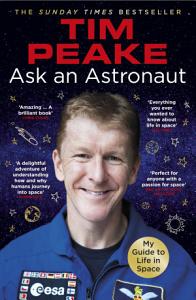 The awe-inspiring Sunday Times Bestseller from astronaut Tim Peake Shortlisted for the British Book Award 2018 'Amazing . . . A brilliant book' Chris Evans, BBC Radio 2 Have you ever thought of becoming an astronaut? Ask an Astronaut is Tim Peake’s personal guide to life in space, based on his historic Principia mission, and the thousands of questions he has been asked since his return to Earth. How does it feel to orbit the earth ten times faster than a speeding bullet? What’s it like to eat, sleep and go to the toilet in space? And where to next – the moon, mars or beyond? From training to launch, historic spacewalk to re-entry, Tim has a fascinating answer to everything you ever wanted to know. He reveals for readers of all ages the extraordinary secrets, cutting-edge science, and everyday wonders of life onboard the International Space Station. Tim is pleased to announce that, as with his previous book, royalties received from the book will be donated to The Prince’s Trust. 'Everything you ever wanted to know about life in space' Times 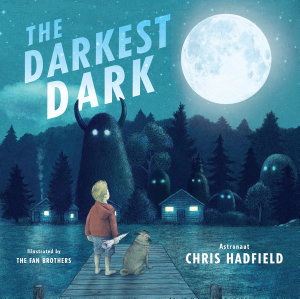 Inspired by the childhood of real-life astronaut Chris Hadfield and brought to life by Terry and Eric Fan's lush, evocative illustrations, The Darkest Dark will encourage readers to dream the impossible. Chris loves rockets and planets and pretending he's a brave astronaut, exploring the universe. Only one problem--at night, Chris doesn't feel so brave. He's afraid of the dark. But when he watches the groundbreaking moon landing on TV, he realizes that space is the darkest dark there is--and the dark is beautiful and exciting, especially when you have big dreams to keep you company. 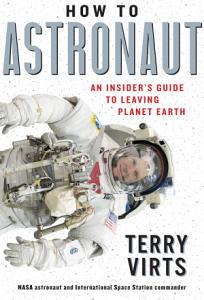 "There's something intriguing to be learned on practically every page... [How to Astronaut] captures the details of an extraordinary job and turns even the mundane aspects of space travel into something fascinating."––Publishers Weekly Ride shotgun on a trip to space with astronaut Terry Virts. A born stroyteller with a gift for the surprising turn of phrase and eye for the perfect you-are-there details, he captures all the highs, lows, humor, and wonder of an experience few will ever know firsthand. Featuring stories covering survival training, space shuttle emergencies, bad bosses, the art of putting on a spacesuit, time travel, and much more! 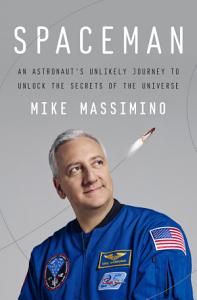 Have you ever wondered what it would be like to find yourself strapped to a giant rocket that’s about to go from zero to 17,500 miles per hour? Or to look back on Earth from outer space and see the surprisingly precise line between day and night? Or to stand in front of the Hubble Space Telescope, wondering if the emergency repair you’re about to make will inadvertently ruin humankind’s chance to unlock the universe’s secrets? Mike Massimino has been there, and in Spaceman he puts you inside the suit, with all the zip and buoyancy of life in microgravity. Massimino’s childhood space dreams were born the day Neil Armstrong set foot on the moon. Growing up in a working-class Long Island family, he catapulted himself to Columbia and then MIT, only to flunk his first doctoral exam and be rejected three times by NASA before making it through the final round of astronaut selection. Taking us through the surreal wonder and beauty of his first spacewalk, the tragedy of losing friends in the Columbia shuttle accident, and the development of his enduring love for the Hubble Telescope—which he and his fellow astronauts were tasked with saving on his final mission—Massimino has written an ode to never giving up and the power of teamwork to make anything possible. Spaceman invites us into a rare, wonderful world where science meets the most thrilling adventure, revealing just what having “the right stuff” really means. 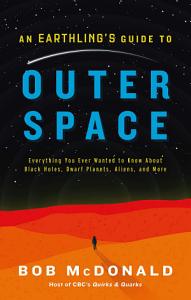 Beloved science commentator Bob McDonald takes us on a tour of our galaxy, unraveling the mysteries of the universe and helping us navigate our place among the stars. How big is our galaxy? Is there life on those distant planets? Are we really made of star dust? And where do stars even come from? In An Earthling’s Guide to Outer Space, we finally have the answers to all those questions and more. With clarity, wisdom, and a great deal of enthusiasm, McDonald explores the curiosities of the big blue planet we call home as well as our galactic neighbours—from Martian caves to storm clouds on Jupiter to the nebulae at the far end of the universe. So if you’re pondering how to become an astronaut, or what dark matter really is, or how an asteroid wiped out the dinosaurs, look no further. Through a captivating mix of stories, experiments, and illustrations, McDonald walks us through space exploration past and present, and reveals what we can look forward to in the future. An Earthling’s Guide to Outer Space is sure to satisfy science readers of all ages, and to remind us earthbound terrestrials just how special our place in the universe truly is. 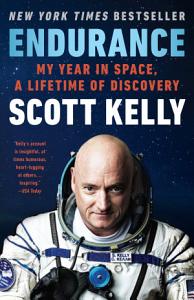 NATIONAL BEST SELLER A stunning, personal memoir from the astronaut and modern-day hero who spent a record-breaking year aboard the International Space Station—a message of hope for the future that will inspire for generations to come. The veteran of four spaceflights and the American record holder for consecutive days spent in space, Scott Kelly has experienced things very few have. Now, he takes us inside a sphere utterly hostile to human life. He describes navigating the extreme challenge of long-term spaceflight, both life-threatening and mundane: the devastating effects on the body; the isolation from everyone he loves and the comforts of Earth; the catastrophic risks of colliding with space junk; and the still more haunting threat of being unable to help should tragedy strike at home--an agonizing situation Kelly faced when, on a previous mission, his twin brother's wife, American Congresswoman Gabrielle Giffords, was shot while he still had two months in space. Kelly's humanity, compassion, humor, and determination resonate throughout, as he recalls his rough-and-tumble New Jersey childhood and the youthful inspiration that sparked his astounding career, and as he makes clear his belief that Mars will be the next, ultimately challenging, step in spaceflight. In Endurance, we see the triumph of the human imagination, the strength of the human will, and the infinite wonder of the galaxy. 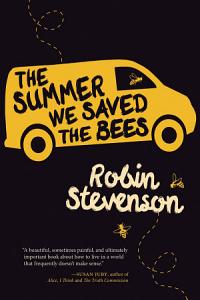 The Summer We Saved the Bees

Wolf’s mother is obsessed with saving the world’s honeybees, so it’s not too surprising when she announces that she’s taking her Save the Bees show on the road—with the whole family. Wolf thinks it’s a terrible plan, and not just because he’ll have to wear a bee costume—in public. He likes his alternative school and hates the idea of missing weeks of classes. His teenage stepsister doesn’t want to leave her boyfriend, and one of his little half sisters has stopped talking altogether, but Wolf’s mom doesn’t seem to notice. She’s convinced that the world is doomed unless ordinary people take extraordinary action. It isn’t until the kids take some drastic action of their own that she is forced to listen when Wolf tells her that dragging the family around the province in a beat-up Ford panel van may not be the best idea she ever had.