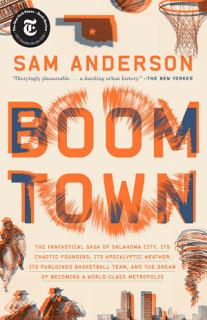 A NEW YORK TIMES NOTABLE BOOK OF 2018 NAMED ONE OF THE BEST BOOKS OF THE YEAR BY NPR, CHICAGO TRIBUNE, SAN FRANCISCO CHRONICLE, THE ECONOMIST AND DEADSPIN Award-winning journalist Sam Anderson’s long-awaited debut is a brilliant, kaleidoscopic narrative of Oklahoma City—a great American story of civics, basketball, and destiny. Oklahoma City was born from chaos. It was founded in a bizarre but momentous “Land Run” in 1889, when thousands of people lined up along the borders of Oklahoma Territory and rushed in at noon to stake their claims. Since then, it has been a city torn between the wild energy that drives its outsized ambitions, and the forces of order that seek sustainable progress. Nowhere was this dynamic better realized than in the drama of the Oklahoma City Thunder basketball team’s 2012-13 season, when the Thunder’s brilliant general manager, Sam Presti, ignited a firestorm by trading future superstar James Harden just days before the first game. Presti’s all-in gamble on “the Process”—the patient, methodical management style that dictated the trade as the team’s best hope for long-term greatness—kicked off a pivotal year in the city’s history, one that would include pitched battles over urban planning, a series of cataclysmic tornadoes, and the frenzied hope that an NBA championship might finally deliver the glory of which the city had always dreamed. Boom Town announces the arrival of an exciting literary voice. Sam Anderson, former book critic for New York magazine and now a staff writer at the New York Times magazine, unfolds an idiosyncratic mix of American history, sports reporting, urban studies, gonzo memoir, and much more to tell the strange but compelling story of an American city whose unique mix of geography and history make it a fascinating microcosm of the democratic experiment. Filled with characters ranging from NBA superstars Kevin Durant and Russell Westbrook; to Flaming Lips oddball frontman Wayne Coyne; to leg 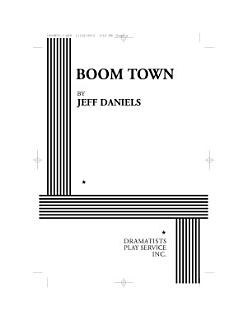 THE STORY: Angela Tompkins has a husband, a failing convenience store and a dream of running off to Chicago with her lover, the local banker. In an explosive story that mixes small-town politics, love and betrayal, Angela is forced to face reality when her husband finds out the truth. 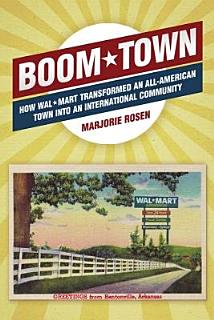 Investigating the personal stories behind the headquarters of the Wal-Mart empire, this examination focuses on the growth of Bentonville, Arkansas--a microcosm of America's social, political, and cultural shift. Numerous personalities are interviewed, including a multimillionaire Palestinian refugee who arrived penniless and is now dedicated to building a synagogue, a Mexican mother of three who was fired after injuring herself on the job, a black executive hired to diversify Wal-Mart whose arrival coincided with a KKK rally, and a Hindu father concerned about interracial dating. In documenting these citizens' stories, this account reveals the challenges and issues facing those who compose this and other "boom towns"--where demographics, the economy, and immigration and migration patterns are continually in flux. In shedding light on these important and timely anecdotes of America's changing rural and suburban landscape, this exploration provides an entertaining and intimate chronicle of the different ethnicities, races, and religions as well as their ongoing struggles to adapt. Emerging as subtle sociology combined with drama and humanity, this overview illustrates the imperceptible and occasionally unpredictable movements that affect the nonmetropolitan environment of the United States. 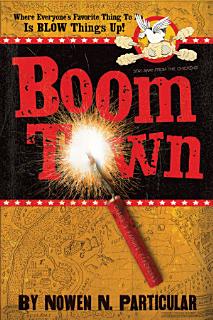 In the spirit of Charlie and the Chocolate Factory, join Jonny Button for a wild ride through Boomtown, where everyone’s favorite thing to do is blow stuff up! After an explosion at Chang’s Famous Fireworks Factory, the Button family is pulled into a mystery that keeps Sheriff Burton Ernie and the rest of Boomtown guessing. Exploding Elves, Rocket Reindeer, amazing inventions and adventure, this story starts with a boom and ends with a bang. The fuse is lit! Things are about to explode! Visit the website www.visitboomtown.com for more information on the book, author, free teacher guides, and more! But stay away from the chickens! 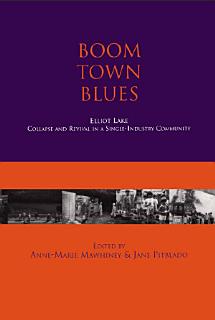 Boom Town Blues: Collapse and Revival in a Single-Industry Community tells of the Northern Ontario city of Elliot Lake, once the uranium capital of the world, which was devastated by the closing of the uranium mines operated by Denison and Rio Algom. The closures and mass layoffs were first announced in 1990 with the layoffs occurring from then until June 1996. Throughout the period after the layoffs were announced, several major research projects were undertaken. One, the Elliot Lake Tracking and Adjustment Study, follows approximately 1,000 of the laid-off miners and 530 of their spouses through their adjustment processes. Another, the Seniors Needs Assessment, examines the human resource and service needs of the increasing numbers of seniors moving to Elliot Lake as part of the community's economic strategy. In addition to these social scientific studies, several land and environmental reclamation research projects have been undertaken. Boom Town Blues: Collapse and Revival in a Single-Industry Community tells the reader about the results of these studies and gives a variety of community-based perspectives on the Elliot Lake story. The book highlights the struggles and successes of families and of the community as a whole. Boom Town Blues is about one community's struggle to survive, to shift its economic base from mining to one where retirement living for seniors, mine decommissioning, and a community-based research facility would be among several economic survival strategies. The book is of interest to readers throughout Northern Ontario and, indeed, wherever single-industry towns are threatened by major shifting in their economic base and are struggling to survive. The book also provides an excellent case study for teachers, students, policy makers, and politicians. 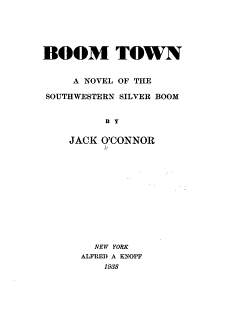 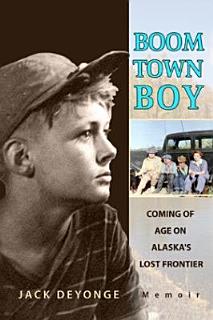 This is the witty, ironic, and deliciously outspoken coming-of-age memoir of Jack de Yonge set in Fairbanks, Alaska -- a once thriving little mining town slowly dying in the remote center of the vast territory in 1934. The son of a hardwareman and a black Irish daughter of the gold rush, de Yonge is a fist-fighting, music-loving altar boy who discovers his own truths about sex, religion, racism, and how the world works. His earthy story describes how war arrives in a small Alaska town next to Nowhere—and nothing is ever the same again. 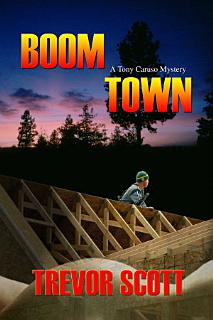 Private Investigator Tony Caruso lives out of his rolling office, an old Ford pickup truck, with his German-trained bomb-sniffing dog, Panzer, a Giant Schnauzer. Tony retired after twenty years in the Navy as an aviation ordnanceman, but this training might not be enough when he is hired by an old friend to look into a murder suicide in Bend, Oregon, a resort Boom Town in the high desert east of the Cascades. Was it a murder suicide as the local sheriff thinks? Or has this idyllic community been ripped apart by not only murder but scandalous sexual deviance, lust, jealousy and the quest for the almighty dollar? Follow Tony as he wades through a cast of characters as diverse as the Oregon landscape to solve this mystery. 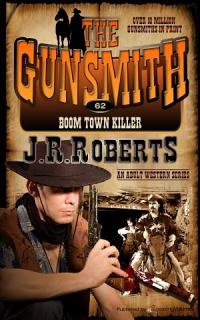 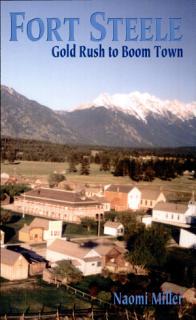 Fort Steele began in 1864 as the site of John Galbraith's ferry, which transported eager gold seekers across the Kootenay River to nearby Wild Horse Creek. Major Sam Steele's "D" Division of the North West Mounted Police built Kootenay Post here in 1887 and helped alleviate tensions between white settlers and the Native Ktunaxa people. With all disputes settled peacefully and Steele recalled to Alberta to take on a new challenge, the appreciative residents renamed the town in 1888 to honour the highly regarded Mountie. As more settlers came, trails became roads. In summer, riverboats ran north and south to link with railways. Government offices made Fort Steele the administrative centre for East Kootenay. A bustling business community developed, and a newspaper was born. A school, three churches, an Opera House, and a hospital soon followed. Fort Steele boomed until the BC Southern Railway bypassed it. Naomi Miller, a local resident and interpreter at Fort Steele Heritage Town, provides many insights into the lives of the citizens of the town and district. 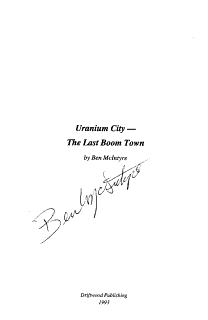 Uranium City started out as a collection of shacks and tents in 1952. In its 30 years of lusty, brawling life it matured into a thriving, close-knit community boasting most of the amenities of towns 800 kilometers to the south. Add to this the advantages of clean air, clean water in pristine lakes and rivers, no traffic jams, very little crime, no juvenile gangs and, aside from the usual problems with alcohol, no drugs. 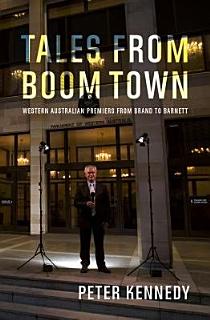 Reveals first-hand the issues linked with changes to the social fabric of Australia; the jailing of two Premiers and a deputy Premier; the ruthless removal of a Premier mid-term; the election of the nation's first female Premier, and the sensational 'WA Inc' Royal Commission. Many interviews were conducted, including those of key national figures to make this account of how the boom-bust West was led into its status as an economic powerhous of the twenty first century.

"This Durango book is a model of local history....Non-Durangoan readers and those wanting a nice case study of a middle-sized town should find this handsome, generously illustrated book rewarding." Tom Noel, Rocky Mountain News "Smith has a good historical style, for one thing. He s obviously done a tremendous amount of research and he works in countless details-but smoothly and entertainingly. His is a dry understated humor. He makes Durango exciting without sensationalizing it." The Sunday Oklahoman.

GET BOOK The Story of Cushman Arkansas the Boom Town that Wouldn t Die Book Description : 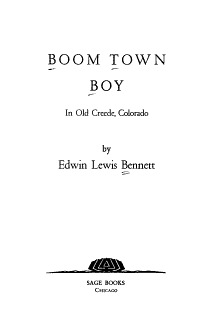 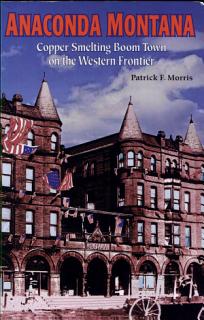 Veteran political journalist Peter Kennedy has spent nearly fifty years observing twelve premiers of Western Australia, across an extraordinary period of change in the state's history, from 1970 to 2019. His insider account reveals issues linked with the jailing of two premiers and a deputy premier, the ruthless removal of a premier mid-term, the election of the nation's first female premier, and the sensational 'WA Inc' Royal Commission. With his distinctive style of commentary, Kennedy notes how the changes in the twelve premiers reflect the development of the state, revealing the personal manoeuvrings linked with a number of key decisions. Interviewing former premiers, prime ministers and other national figures, the result is a lively book about how politics is played in the boom - bust West, still clearly an economic powerhouse of the twenty-first century in Australia. This updated and revised edition covers Mark McGowan's first two years as WA Premier after a landslide victory over Colin Barnett in the 2017 state election. It also features a foreword by the ABC's election analyst, Antony Green, that addresses the need for reform in the Legislative Council.

GOLD! The one-word headline in the July 3, 1893 edition of the Fulford Signal newspaper summed up the very reason for the existence of this mining boom camp in the rugged mountains southeast of Eagle, Colorado. Although Fulford's booms were early and short-lived, interest in the one-time mining camp has continued for decades. Over the years, the stories of adventure and tragedy (including a tale of a lost gold mine) kept people intrigued. Author Richard Perske is the first writer to spend countless hours researching old newspapers and historical files to present the true story of Fulford.