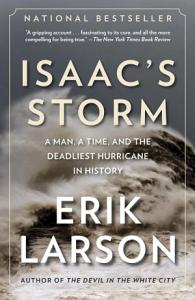 At the dawn of the twentieth century, a great confidence suffused America. Isaac Cline was one of the era's new men, a scientist who believed he knew all there was to know about the motion of clouds and the behavior of storms. The idea that a hurricane could damage the city of Galveston, Texas, where he was based, was to him preposterous, "an absurd delusion." It was 1900, a year when America felt bigger and stronger than ever before. Nothing in nature could hobble the gleaming city of Galveston, then a magical place that seemed destined to become the New York of the Gulf. That August, a strange, prolonged heat wave gripped the nation and killed scores of people in New York and Chicago. Odd things seemed to happen everywhere: A plague of crickets engulfed Waco. The Bering Glacier began to shrink. Rain fell on Galveston with greater intensity than anyone could remember. Far away, in Africa, immense thunderstorms blossomed over the city of Dakar, and great currents of wind converged. A wave of atmospheric turbulence slipped from the coast of western Africa. Most such waves faded quickly. This one did not. In Cuba, America's overconfidence was made all too obvious by the Weather Bureau's obsession with controlling hurricane forecasts, even though Cuba's indigenous weathermen had pioneered hurricane science. As the bureau's forecasters assured the nation that all was calm in the Caribbean, Cuba's own weathermen fretted about ominous signs in the sky. A curious stillness gripped Antigua. Only a few unlucky sea captains discovered that the storm had achieved an intensity no man alive had ever experienced. In Galveston, reassured by Cline's belief that no hurricane could seriously damage the city, there was celebration. Children played in the rising water. Hundreds of people gathered at the beach to marvel at the fantastically tall waves and gorgeous pink sky, until the surf began ripping the city's beloved beachfront apart. Within the next few hours Galveston would endure 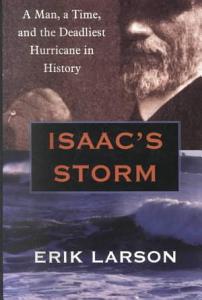 Provides an account of the hurricane which struck Galveston, Texas, on September 8, 1900, and killed as many as ten thousand people.

Provides an account of the hurricane which struck Galveston, Texas, in 1900 and killed ten thousand people. 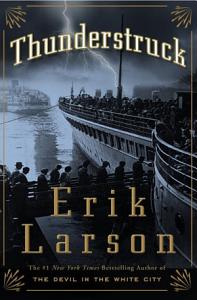 A true story of love, murder, and the end of the world’s “great hush.” In Thunderstruck, Erik Larson tells the interwoven stories of two men—Hawley Crippen, a very unlikely murderer, and Guglielmo Marconi, the obsessive creator of a seemingly supernatural means of communication—whose lives intersect during one of the greatest criminal chases of all time. Set in Edwardian London and on the stormy coasts of Cornwall, Cape Cod, and Nova Scotia, Thunderstruck evokes the dynamism of those years when great shipping companies competed to build the biggest, fastest ocean liners; scientific advances dazzled the public with visions of a world transformed; and the rich outdid one another with ostentatious displays of wealth. Against this background, Marconi races against incredible odds and relentless skepticism to perfect his invention: the wireless, a prime catalyst for the emergence of the world we know today. Meanwhile, Crippen, “the kindest of men,” nearly commits the perfect murder. With his unparalleled narrative skills, Erik Larson guides us through a relentlessly suspenseful chase over the waters of the North Atlantic. Along the way, he tells of a sad and tragic love affair that was described on the front pages of newspapers around the world, a chief inspector who found himself strangely sympathetic to the killer and his lover, and a driven and compelling inventor who transformed the way we communicate. 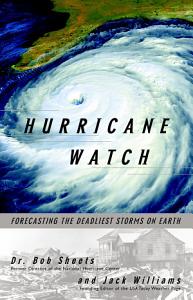 The ultimate guide to the ultimate storms, Hurricane Watch is a fascinating blend of science and history from one of the world's foremost meteorologists and an award-winning science journalist. This in-depth look at these awe-inspiring acts of nature covers everything from the earliest efforts by seafarers at predicting storms to the way satellite imaging is revolutionizing hurricane forecasting. It reveals the latest information on hurricanes: their effects on ocean waves, the causes of the variable wind speeds in different parts of the storm, and the origins of the super-cooled shafts of water that vent at high altitudes. Hurricane Watch is a compelling history of man's relationship with the deadliest storms on earth. Includes: - The story of the nineteenth-century Cuban Jesuit whose success at predicting the great cyclones was considered almost mystical. - A new look at Isaac Cline, whose infamous failure to predict the Galveston Hurricane left him obsessed with the devastating effects of storm surge. - The story of the Hurricane Hunters, including the first man ever to deliberately fly into a hurricane. - A complete account of how computer modeling has changed hurricane tracking. - A history of Project Stormfury: the only significant, organized effort to reduce the damaging strength of severe hurricanes. - A unique firsthand account of Hurricane Andrew by both authors, who were at the National Hurricane Center when Andrew struck. - A listing of the deadliest storms in history. From the Trade Paperback edition. 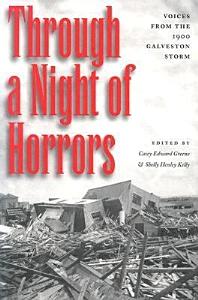 Through a Night of Horrors

GET BOOK Through a Night of Horrors Book Description :

In this work, witnesses to this deadly disaster describe, in many never-before-published accounts, their encounters with this monstrous storm. 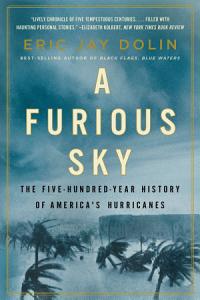 With A Furious Sky, best-selling author Eric Jay Dolin tells the history of America itself through its five-hundred-year battle with the fury of hurricanes. Hurricanes menace North America from June through November every year, each as powerful as 10,000 nuclear bombs. These megastorms will likely become more intense as the planet continues to warm, yet we too often treat them as local disasters and TV spectacles, unaware of how far-ranging their impact can be. As best-selling historian Eric Jay Dolin contends, we must look to our nation’s past if we hope to comprehend the consequences of the hurricanes of the future. With A Furious Sky, Dolin has created a vivid, sprawling account of our encounters with hurricanes, from the nameless storms that threatened Columbus’s New World voyages to the destruction wrought in Puerto Rico by Hurricane Maria. Weaving a story of shipwrecks and devastated cities, of heroism and folly, Dolin introduces a rich cast of unlikely heroes, such as Benito Vines, a nineteenth-century Jesuit priest whose innovative methods for predicting hurricanes saved countless lives, and puts us in the middle of the most devastating storms of the past, none worse than the Galveston Hurricane of 1900, which killed at least 6,000 people, the highest toll of any natural disaster in American history. Dolin draws on a vast array of sources as he melds American history, as it is usually told, with the history of hurricanes, showing how these tempests frequently helped determine the nation’s course. Hurricanes, it turns out, prevented Spain from expanding its holdings in North America beyond Florida in the late 1500s, and they also played a key role in shifting the tide of the American Revolution against the British in the final stages of the conflict. As he moves through the centuries, following the rise of the United States despite the chaos caused by hurricanes, Dolin traces the corresponding development of hurricane science, from important discoveries

SuperSummary, a modern alternative to SparkNotes and CliffsNotes, offers high-quality study guides for challenging works of literature. This 69-page guide for "Isaac's Storm" by Erik Larson includes detailed chapter summaries and analysis covering 6 chapters, as well as several more in-depth sections of expert-written literary analysis. Featured content includes commentary on major characters, 25 important quotes, essay topics, and key themes like American Hubris at the Turn of the Century and The Effect of Politics on Severe Weather. 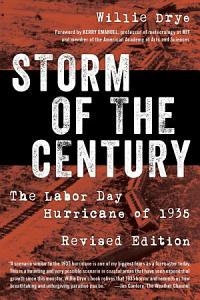 Storm of the Century

GET BOOK Storm of the Century Book Description :

In 1934, hundreds of jobless World War I veterans were sent to the remote Florida Keys to build a highway from Miami to Key West. The Roosevelt Administration was making a genuine effort to help these down-and-out vets, many of whom suffered from what is known today as post-traumatic stress disorder. But the attempt to help them turned into a tragedy. The supervisors in charge of the veterans misunderstood the danger posed by hurricanes in the low-lying Florida Keys. In late August 1935, a small, stealthy tropical storm crossed the Bahamas, causing little damage. When it entered the Straits of Florida, however, it exploded into one of the most powerful hurricanes on record. But US Weather Bureau forecasters could only guess at its exact position, and their calculations were well off the mark. The hurricane that struck the Upper Florida Keys on the evening of September 2, 1935 is still the most powerful hurricane to make landfall in the US. Supervisors waited too long to call for an evacuation train from Miami to move the vets out of harm’s way. The train was slammed by the storm surge soon after it reached Islamorada. Only the 160-ton locomotive was left upright on the tracks. About 400 veterans were left unprotected in flimsy work camps. Around 260 of them were killed. This is their story, with newly discovered photos and stories of some of the heroes of the Labor Day 1935 calamity. 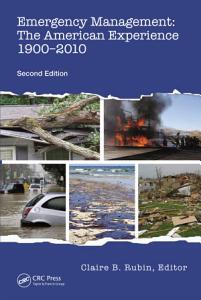 Following in the footsteps of its popular predecessor, the second edition of Emergency Management: The American Experience 19002010 provides the background needed to understand the key political and policy underpinnings of emergency management, exploring how major "focusing events" have shaped the development of emergency management. It builds on