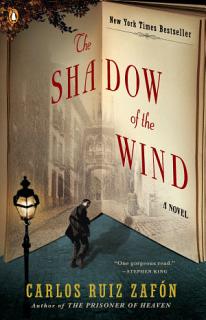 "Gabriel García Márquez meets Umberto Eco meets Jorge Luis Borges for a sprawling magic show." --The New York Times Book Review A New York Times Bestseller Barcelona, 1945: A city slowly heals in the aftermath of the Spanish Civil War, and Daniel, an antiquarian book dealer’s son who mourns the loss of his mother, finds solace in a mysterious book entitled The Shadow of the Wind, by one Julián Carax. But when he sets out to find the author’s other works, he makes a shocking discovery: someone has been systematically destroying every copy of every book Carax has written. In fact, Daniel may have the last of Carax’s books in existence. Soon Daniel’s seemingly innocent quest opens a door into one of Barcelona’s darkest secrets--an epic story of murder, madness, and doomed love. “ Anyone who enjoys novels that are scary, erotic, touching, tragic and thrilling should rush right out to the nearest bookstore and pick up The Shadow of the Wind. Really, you should.” --Michael Dirda, The Washington Post "Wonderous... masterful... The Shadow of the Wind is ultimately a love letter to literature, intended for readers as passionate about storytelling as its young hero." --Entertainment Weekly (Editor's Choice) "One gorgeous read." --Stephen King From the Trade Paperback edition. 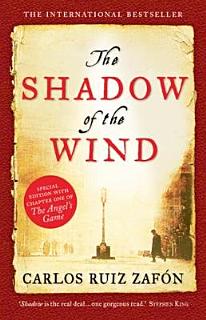 Barcelona 1945: young Daniel Sempere is taken to a fabulous secret library called the Cemetery of Forgotten Books where he is told he must 'adopt' a single book, promising to care for it always. Entranced by his chosen book, The Shadow of the Wind, Daniel begins a quest to find the truth about the life and death of its mysterious author. 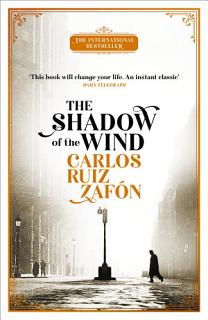 The international bestseller and modern classic - over 20 million copies sold worldwide 'Shadow is the real deal, a novel full of cheesy splendour and creaking trapdoors, a novel where even the subplots have subplots. One gorgeous read' STEPHEN KING 'An instant classic' DAILY TELEGRAPH The Shadow of the Wind is a stunning literary thriller in which the discovery of a forgotten book leads to a hunt for an elusive author who may or may not still be alive... Hidden in the heart of the old city of Barcelona is the 'Cemetery of Lost Books', a labyrinthine library of obscure and forgotten titles that have long gone out of print. To this library, a man brings his 10-year-old son Daniel one cold morning in 1945. Daniel is allowed to choose one book from the shelves and pulls out 'The Shadow of the Wind' by Julian Carax. But as he grows up, several people seem inordinately interested in his find. Then, one night, as he is wandering the old streets once more, Daniel is approached by a figure who reminds him of a character from the book, a character who turns out to be the devil. This man is tracking down every last copy of Carax's work in order to burn them. What begins as a case of literary curiosity turns into a race to find out the truth behind the life and death of Julian Carax and to save those he left behind... A SUNDAY TIMES bestseller and Richard & Judy book club choice. 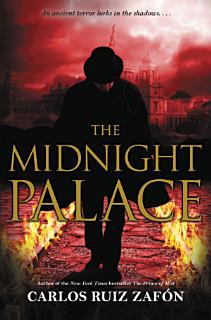 In the heart of Calcutta lurks a dark mystery.... Set in Calcutta in the 1930s, The Midnight Palace begins on a dark night when an English lieutenant fights to save newborn twins Ben and Sheere from an unthinkable threat. Despite monsoon-force rains and terrible danger lurking around every street corner, the young lieutenant manages to get them to safety, but not without losing his own life. . . . Years later, on the eve of Ben and Sheere's sixteenth birthday, the mysterious threat reenters their lives. This time, it may be impossible to escape. With the help of their brave friends, the twins will have to take a stand against the terror that watches them in the shadows of the night--and face the most frightening creature in the history of the City of Palaces. 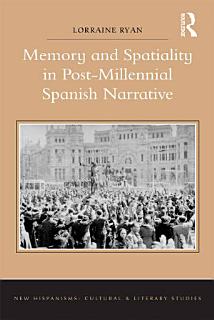 Focusing on literary texts produced from 2000 to 2009, Lorraine Ryan examines the imbrication between the preservation of Republican memory and the transformations of Spanish public space during the period from 1931 to 2005. Accordingly, Ryan analyzes the spatial empowerment and disempowerment of Republican memory and identity in Dulce Chacón’s Cielos de barro, Ángeles López’s Martina, la rosa número trece, Alberto Méndez’s ’Los girasoles ciegos,’ Carlos Ruiz Zafón ́s La sombra del viento, Emili Teixidor’s Pan negro, Bernardo Atxaga’s El hijo del acordeonista, and José María Merino’s La sima. The interrelationship between Republican subalternity and space is redefined by these writers as tense and constantly in flux, undermined by its inexorable relationality, which leads to subjects endeavoring to instill into space their own values. Subjects erode the hegemonic power of the public space by articulating in an often surreptitious form their sense of belonging to a prohibited Republican memory culture. In the democratic period, they seek a categorical reinstatement of same on the public terrain. Ryan also considers the motivation underlying this coterie of authors’ commitment to the issue of historical memory, an analysis which serves to amplify the ambits of existing scholarship that tends to ascribe it solely to postmemory. 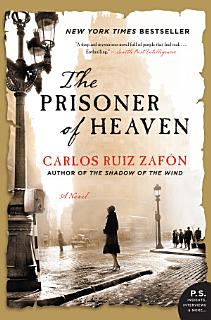 The Prisoner of Heaven

GET BOOK The Prisoner of Heaven Book Description :

Barcelona, 1957. It is Christmas, and Daniel Sempere and his wife, Bea, have much to celebrate. They have a beautiful new baby son named Julián, and their close friend Fermín Romero de Torres is about to be wed. But their joy is eclipsed when a mysterious stranger visits the Sempere bookshop and threatens to divulge a terrible secret that has been buried for two decades in the city's dark past. His appearance plunges Fermín and Daniel into a dangerous adventure that will take them back to the 1940s and the early days of Franco's dictatorship. The terrifying events of that time launch them on a search for the truth that will put into peril everything they love, and will ultimately transform their lives. 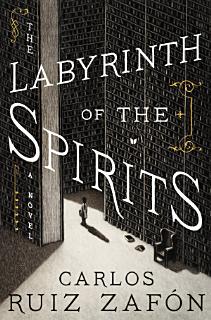 The Labyrinth of the Spirits

GET BOOK The Labyrinth of the Spirits Book Description :

The internationally acclaimed, New York Times bestselling author returns to the magnificent universe he constructed in his bestselling novels The Shadow of the Wind, The Angel’s Game, and The Prisoner of Heaven in this riveting series finale—a heart-pounding thriller and nail-biting work of suspense which introduces a sexy, seductive new heroine whose investigation shines a light on the dark history of Franco’s Spain. In this unforgettable final volume of Ruiz Zafón’s cycle of novels set in the universe of the Cemetery of Forgotten Books, beautiful and enigmatic Alicia Gris, with the help of the Sempere family, uncovers one of the most shocking conspiracies in all Spanish history. Nine-year-old Alicia lost her parents during the Spanish Civil War when the Nacionales (the fascists) savagely bombed Barcelona in 1938. Twenty years later, she still carries the emotional and physical scars of that violent and terrifying time. Weary of her work as an investigator for Spain’s secret police in Madrid, a job she has held for more than a decade, the twenty-nine-year old plans to move on. At the insistence of her boss, Leandro Montalvo, she remains to solve one last case: the mysterious disappearance of Spain’s Minister of Culture, Mauricio Valls. With her partner, the intimidating policeman Juan Manuel Vargas, Alicia discovers a possible clue—a rare book by the author Victor Mataix hidden in Valls’ office in his Madrid mansion. Valls was the director of the notorious Montjuic Prison in Barcelona during World War II where several writers were imprisoned, including David Martín and Victor Mataix. Traveling to Barcelona on the trail of these writers, Alicia and Vargas meet with several booksellers, including Juan Sempere, who knew her parents. As Alicia and Vargas come closer to finding Valls, they uncover a tangled web of kidnappings and murders tied to the Franco regime, whose corruption is more widespread and horrifying than anyone imagined. Alicia’s coura 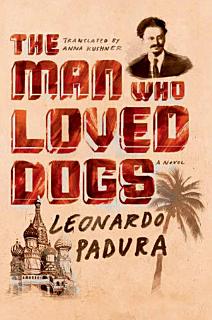 The Man Who Loved Dogs

GET BOOK The Man Who Loved Dogs Book Description :

A gripping novel about the assassination of Leon Trotsky in Mexico City in 1940 In The Man Who Loved Dogs, Leonardo Padura brings a noir sensibility to one of the most fascinating and complex political narratives of the past hundred years: the assassination of Leon Trotsky by Ramón Mercader. The story revolves around Iván Cárdenas Maturell, who in his youth was the great hope of modern Cuban literature—until he dared to write a story that was deemed counterrevolutionary. When we meet him years later in Havana, Iván is a loser: a humbled and defeated man with a quiet, unremarkable life who earns his modest living as a proofreader at a veterinary magazine. One afternoon, he meets a mysterious foreigner in the company of two Russian wolfhounds. This is "the man who loved dogs," and as the pair grow closer, Iván begins to understand that his new friend is hiding a terrible secret. Moving seamlessly between Iván's life in Cuba, Ramón's early years in Spain and France, and Trotsky's long years of exile, The Man Who Loved Dogs is Padura's most ambitious and brilliantly executed novel yet. This is a story about political ideals tested and characters broken, a multilayered epic that effortlessly weaves together three different plot threads— Trotsky in exile, Ramón in pursuit, Iván in frustrated stasis—to bring emotional truth to historical fact. A novel whose reach is matched only by its astonishing successes on the page, The Man Who Loved Dogs lays bare the human cost of abstract ideals and the insidious, corrosive effects of life under a repressive political regime. 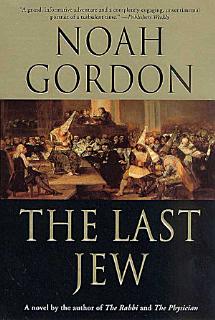 In the year 1492, the Inquisition has all of Spain in its grip. After centuries of pogrom-like riots encouraged by the Church, the Jews - who have been an important part of Spanish life since the days of the Romans - are expelled from the country by royal edict. Many who wish to remain are intimidated by Church and Crown and become Catholics, but several hundred thousand choose to retain their religion and depart; given little time to flee, some perish even before they can escape from Spain. Yonah Toledano, the 15-year-old son of a celebrated Spanish silversmith, has seen his father and brother die during these terrible days - victims whose murders go almost unnoticed in a time of mass upheaval. Trapped in Spain by circumstances, he is determined to honor the memory of his family by remaining a Jew. On a donkey named Moise, Yonah begins a meandering journey, a young fugitive zigzagging across the vastness of Spain. Toiling at manual labor, he desperately tries to cling to his memories of a vanished culture. As a lonely shepherd on a mountaintop he hurls snatches of almost forgotten Hebrew at the stars, as an apprentice armorer he learns to fight like a Christian knight. Finally, as a man living in a time and land where danger from the Inquisition is everywhere, he deals with the questions that mark his past. How he discovers the answers, how he finds his way to a singular and strong Marrano woman, how he achieves a life with the outer persona of a respected Old Christian physician and the inner life of a secret Jew, is the fabric of this novel. The Last Jew is a glimpse of the past, an authentic tale of high adventure, and a tender and unforgettable love story. In it, Noah Gordon utilizes his greatest strengths, and the result is remarkable and moving.