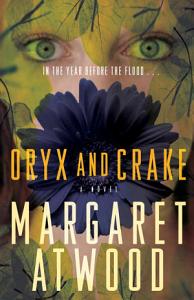 A stunning and provocative new novel by the internationally celebrated author of The Blind Assassin, winner of the Booker Prize. Margaret Atwood’s new novel is so utterly compelling, so prescient, so relevant, so terrifyingly-all-too-likely-to-be-true, that readers may find their view of the world forever changed after reading it. This is Margaret Atwood at the absolute peak of her powers. For readers of Oryx and Crake, nothing will ever look the same again. The narrator of Atwood's riveting novel calls himself Snowman. When the story opens, he is sleeping in a tree, wearing an old bedsheet, mourning the loss of his beloved Oryx and his best friend Crake, and slowly starving to death. He searches for supplies in a wasteland where insects proliferate and pigoons and wolvogs ravage the pleeblands, where ordinary people once lived, and the Compounds that sheltered the extraordinary. As he tries to piece together what has taken place, the narrative shifts to decades earlier. How did everything fall apart so quickly? Why is he left with nothing but his haunting memories? Alone except for the green-eyed Children of Crake, who think of him as a kind of monster, he explores the answers to these questions in the double journey he takes - into his own past, and back to Crake's high-tech bubble-dome, where the Paradice Project unfolded and the world came to grief. With breathtaking command of her shocking material, and with her customary sharp wit and dark humour, Atwood projects us into an outlandish yet wholly believable realm populated by characters who will continue to inhabit our dreams long after the last chapter. 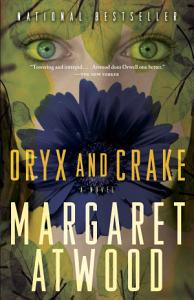 From the #1 New York Times bestselling author of The Handmaid's Tale Oryx and Crake is at once an unforgettable love story and a compelling vision of the future. Snowman, known as Jimmy before mankind was overwhelmed by a plague, is struggling to survive in a world where he may be the last human, and mourning the loss of his best friend, Crake, and the beautiful and elusive Oryx whom they both loved. In search of answers, Snowman embarks on a journey–with the help of the green-eyed Children of Crake–through the lush wilderness that was so recently a great city, until powerful corporations took mankind on an uncontrolled genetic engineering ride. Margaret Atwood projects us into a near future that is both all too familiar and beyond our imagining. 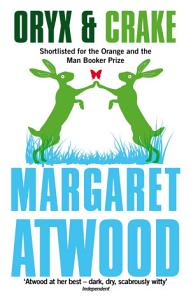 By the author of THE HANDMAID'S TALE and ALIAS GRACE * Pigs might not fly but they are strangely altered. So, for that matter, are wolves and racoons. A man, once named Jimmy, lives in a tree, wrapped in old bedsheets, now calls himself Snowman. The voice of Oryx, the woman he loved, teasingly haunts him. And the green-eyed Children of Crake are, for some reason, his responsibility. * Praise for Oryx and Crake: 'In Jimmy, Atwood has created a great character: a tragic-comic artist of the future, part buffoon, part Orpheus. An adman who's a sad man; a jealous lover who's in perpetual mourning; a fantasist who can only remember the past' -INDEPENDENT 'Gripping and remarkably imagined' -LONDON REVIEW OF BOOKS 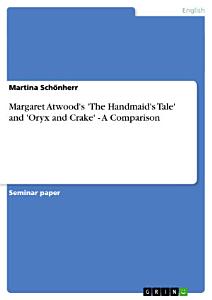 Seminar paper from the year 2007 in the subject English Language and Literature Studies - Literature, grade: 1,3, University of Constance (Literaturwissenschaften), course: Margaret Atwood's Later Fiction, language: English, abstract: Margaret Atwood's novels The Handmaid's Tale (T.H.T., 1985) and Oryx and Crake (O. & C., 2003) are works of speculative fiction that are set in the near future. Both of the depicted scenarios take place in the U.S.A. and could be classified as "survivor's stories" as they are told from the perspective of a person that survived the new system or the catastrophe the books deal with. T.H.T. takes the reader into an oppressive system that has become reality in the year 2005. In this system women are divided into different kinds of "functional groups" according to their abilities. The story is told by the handmaid Offred who - as all handmaids - is still believed to be fertile. Thus she is solely good for childbearing and has not got any choice. This system however is confined to the United States so that there is still hope for an escape to a better life for the people living under the system. The scenario in O. & C. on the other hand occurs around the year 2025 and depicts a world wide catastrophe where Snowman - the narrator of the story - is one of the few surviving human beings. This paper will compare the two novels according to some points of analysis. I had to confine myself to a few themes as it is impossible to include all topics that could be of importance. To start with, I will take a look at the social and political background of the time the novels were written in, followed by a generic analysis of the works. Secondly I will answer the question about the inspiration for these novels and I will deal with the epilogues Atwood added to her books. This will be followed by a chapter about the main topics of the novels which are reproduction, religion and sexuality. Last but not least I will compare the main characters and discus 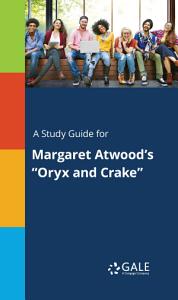 A study guide for Margaret Atwood s Oryx and Crake

A study guide for Margaret Atwood's "Oryx and Crake", excerpted from Gale's acclaimed Novels for Students series. This concise study guide includes plot summary; character analysis; author biography; study questions; historical context; suggestions for further reading; and much more. For any literature project, trust Novels for Students for all of your research needs. 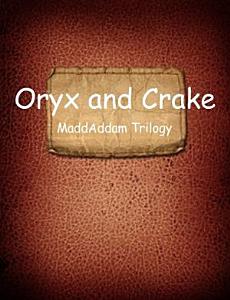 Oryx and Crake is at once an unforgettable love story and a compelling vision of the future. Snowman, known as Jimmy before mankind was overwhelmed by a plague, is struggling to survive in a world where he may be the last human, and mourning the loss of his best friend, Crake, and the beautiful and elusive Oryx whom they both loved. In search of answers, Snowman embarks on a journey–with the help of the green-eyed Children of Crake–through the lush wilderness that was so recently a great city, until powerful corporations took mankind on an uncontrolled genetic engineering ride. Margaret Atwood projects us into a near future that is both all too familiar and beyond our imagining. Amazon.com Review In Oryx and Crake, a science fiction novel that is more Swift than Heinlein, more cautionary tale than "fictional science" (no flying cars here), Margaret Atwood depicts a near-future world that turns from the merely horrible to the horrific, from a fool's paradise to a bio-wasteland. Snowman (a man once known as Jimmy) sleeps in a tree and just might be the only human left on our devastated planet. He is not entirely alone, however, as he considers himself the shepherd of a group of experimental, human-like creatures called the Children of Crake. As he scavenges and tends to his insect bites, Snowman recalls in flashbacks how the world fell apart. While the story begins with a rather ponderous set-up of what has become a clichéd landscape of the human endgame, littered with smashed computers and abandoned buildings, it takes on life when Snowman recalls his boyhood meeting with his best friend Crake: "Crake had a thing about him even then.... He generated awe ... in his dark laconic clothing." A dangerous genius, Crake is the book's most intriguing character. Crake and Jimmy live with all the other smart, rich people in the Compounds--gated company towns owned by biotech corporations. (Ordinary folks are kept outside the gates in the chaotic "pleeblands.") Meanwhile, 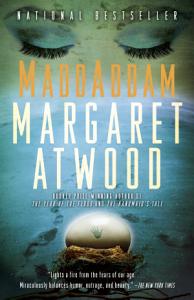 For fans of the first two books and readers of Margaret Atwood's fiction in general. Bringing together characters from Oryx and Crake and The Year of the Flood, this thrilling conclusion to Margaret Atwood's speculative fiction trilogy confirms the ultimate endurance of humanity, community, and love. Months after the Waterless Flood pandemic has wiped out most of humanity, Toby and Ren have rescued their friend Amanda from the vicious Painballers. They return to the MaddAddamite cob house, which is being fortified against man and giant Pigoon alike. Accompanying them are the Crakers, the gentle, quasi-human species engineered by the brilliant but deceased Crake. While their reluctant prophet, Jimmy -- Crake's one-time friend -- recovers from a debilitating fever, it's left to Toby to narrate the Craker theology, with Crake as Creator. She must also deal with cultural misunderstandings, terrible coffee, and her jealousy over her lover, Zeb. Meanwhile, Zeb searches for Adam One, founder of the God's Gardeners, the pacifist green religion from which Zeb broke years ago to lead the MaddAddamites in active resistance against the destructive CorpSeCorps. Now, under threat of an imminent Painballer attack, the MaddAddamites must fight back with the aid of their newfound allies, some of whom have four trotters. At the centre, is the extraordinary story of Zeb's past, which involves a lost brother, a hidden murder, a bear, and a bizarre act of revenge. Combining adventure, humour, romance, superb storytelling, and an imagination that is at once dazzlingly inventive and grounded in a recognizable world, MaddAddam is vintage Margaret Atwood, and a moving and dramatic conclusion to her internationally celebrated dystopian trilogy. 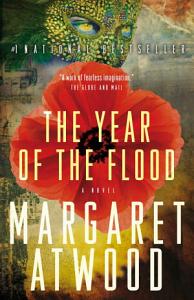 The Year of the Flood

GET BOOK The Year of the Flood Book Description :

From the Booker Prize–winning author of Oryx and Crake, the first book in the MaddAddam Trilogy, and The Handmaid’s Tale. Internationally acclaimed as ONE OF THE BEST BOOKS OF THE YEAR by, amongst others, the Globe and Mail, the New York Times, the New Yorker, and the Village Voice In a world driven by shadowy, corrupt corporations and the uncontrolled development of new, gene-spliced life forms, a man-made pandemic occurs, obliterating human life. Two people find they have unexpectedly survived: Ren, a young dancer locked inside the high-end sex club Scales and Tails (the cleanest dirty girls in town), and Toby, solitary and determined, who has barricaded herself inside a luxurious spa, watching and waiting. The women have to decide on their next move--they can’t stay hidden forever. But is anyone else out there? From the Trade Paperback edition.

High Quality Content by WIKIPEDIA articles! Oryx and Crake is a novel by the Canadian author Margaret Atwood. Atwood has at times disputed the novel being science fiction, preferring to label it speculative fiction and "adventure romance" because it does not deal with 'things that have not been invented yet' and goes beyond the realism she associates with the novel form.Oryx and Crake was first published by McClelland and Stewart in 2003 and was also shortlisted for the Man Booker Prize for Fiction that same year. 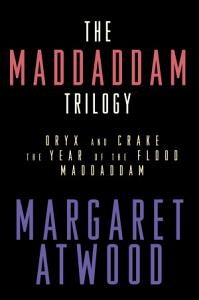 From Booker Prize–winner and #1 national bestseller Margaret Atwood, The MaddAddam Trilogy is so utterly compelling, so prescient, so relevant, so all-too-likely-to-be-true, that readers may find their view of the world forever changed after reading it. This is Margaret Atwood at the absolute peak of her powers. With breathtaking command of her brilliantly conceived material, and with her customary sharp wit and dark humour, she projects us into an outlandish yet wholly believable realm populated by characters who will continue to inhabit our dreams long after the last chapter. In the tradition of The Handmaid’s Tale, Oryx and Crake and The Year of the Flood envision a near future that is both beyond our imagining and all too familiar: a world devastated by uncontrolled genetic engineering and a widespread plague, with only a few remaining humans fighting for survival. Combining adventure, humour, romance and superb storytelling that is at once dazzlingly inventive and grounded in a recognizable world, MaddAddam is a moving and dramatic conclusion to this internationally celebrated dystopian trilogy.