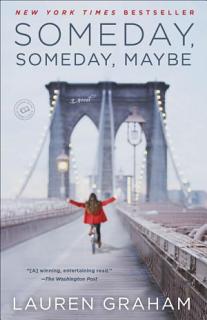 From Lauren Graham, the beloved star of Gilmore Girls and Parenthood, comes a witty, charming, and hilariously relatable debut novel about a struggling young actress trying to get ahead―and keep it together―in New York City. It’s January 1995, and Franny Banks has just six months left of the three-year deadline she set for herself when she came to New York, dreaming of Broadway and doing “important” work. But all she has to show for her efforts so far is a part in an ad for ugly Christmas sweaters, and a gig waiting tables at a comedy club. Her roommates―her best friend Jane, and Dan, an aspiring sci-fi writer―are supportive, yet Franny knows a two-person fan club doesn’t exactly count as success. Everyone tells her she needs a backup plan, and though she can almost picture moving back home and settling down with her perfectly nice ex-boyfriend, she’s not ready to give up on her goal of having a career like her idols Diane Keaton and Meryl Streep. Not just yet. But while she dreams of filling their shoes, in the meantime, she’d happily settle for a speaking part in almost anything—and finding a hair product combination that works. Everything is riding on the upcoming showcase for her acting class, where she’ll finally have a chance to perform for people who could actually hire her. And she can’t let herself be distracted by James Franklin, a notorious flirt and the most successful actor in her class, even though he’s suddenly started paying attention. Meanwhile, her bank account is rapidly dwindling, her father wants her to come home, and her agent doesn’t return her calls. But for some reason, she keeps believing that she just might get what she came for. Someday, Someday, Maybe is a story about hopes and dreams, being young in a city, and wanting something deeply, madly, desperately. It’s about finding love, finding yourself, and perhaps most difficult of all in New York City, finding an acting job. Look for special features inside. 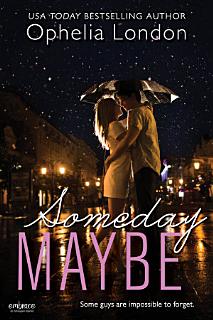 Rachel Daughtry has a ten-year plan that leaves no room for mistakes. Or not-so-serious boys—including Oliver Wentworth, the freshman boyfriend she's never forgotten. Now she's back in San Francisco with an awesome-slash-scary new job. Unfortunately, The Plan doesn't cover things like meeting her best friend's new "secret" guy...Oliver. Fortunately, no one knows that Rachel and Oliver were ever together, and endless bikini wax torture couldn't make Rachel hurt her friend. But it's killing Rachel. She's not over him. Not even a little. And as her ten-year plan crumbles around her, Rachel realizes that maybe—just maybe—Oliver feels the same way. Now Rachel is on the verge of losing all control. And her best friend. And the love of her life... Someday Maybe is a modern take on Jane Austen's Persuasion that proves a second chance at true love is always worth the risk. 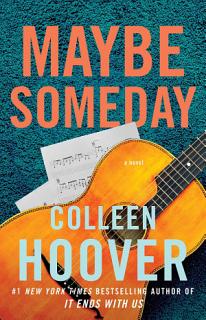 From #1 New York Times bestselling author Colleen Hoover, a passionate tale of friendship, betrayal, and romance. At twenty-two years old, Sydney is enjoying a great life: She’s in college, working a steady job, in love with her wonderful boyfriend, Hunter, and rooming with her best friend, Tori. But everything changes when she discovers that Hunter is cheating on her—and she’s forced to decide what her next move should be. Soon, Sydney finds herself captivated by her mysterious and attractive neighbor, Ridge. She can't take her eyes off him or stop listening to the passionate way he plays his guitar every evening out on his balcony. And there’s something about Sydney that Ridge can’t ignore, either. They soon find themselves needing each other in more ways than one. 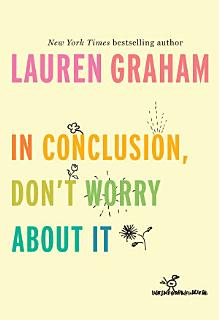 In Conclusion Don t Worry About It

GET BOOK In Conclusion Don t Worry About It Book Description :

NEW YORK TIMES BESTSELLER • Advice for graduates and reflections on staying true to yourself from the beloved Gilmore Girls actress and New York Times bestselling author of the memoir Talking as Fast as I Can and the novel Someday, Someday, Maybe. “If you’re kicking yourself for not having accomplished all you should have by now, don’t worry about it. Even without any ‘big’ accomplishments yet to your name, you are enough.” In this expansion of the 2017 commencement speech she gave at her hometown Langley High, Lauren Graham, the beloved star of Gilmore Girls and Parenthood, reflects on growing up, pursuing your dreams, and living in the here and now. “Whatever path you choose, whatever career you decide to go after, the important thing is that you keep finding joy in what you’re doing, especially when the joy isn’t finding you.” In her hilarious, relatable voice, Graham reminds us to be curious and compassionate, no matter where life takes us or what we’ve yet to achieve. Grounded and inspiring—and illustrated throughout with drawings by Graham herself—here is a comforting road map to a happy life. “I’ve had ups and downs. I’ve had successes and senior slumps. I’ve been the girl who has the lead, and the one who wished she had the bigger part. The truth? They don’t feel that different from each other.” 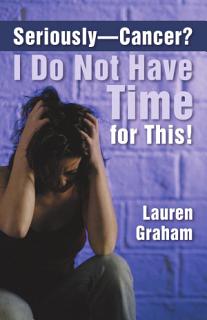 Seriously Cancer I Do Not Have Time for This

GET BOOK Seriously Cancer I Do Not Have Time for This Book Description :

Lauren Graham was three weeks away from turning twenty-one-loving college life, her friends, and her family-when her life was turned upside down and changed forever. She was diagnosed with cancer-specifically, with acute lymphoblastic lymphoma. In her memoir, Lauren considers the everyday life of a cancer patient and recalls all the challenges she experienced with humor and brutal honesty. Her unique storytelling, presented through the e-mails that she wrote over the course of nearly three years of cancer treatments, provides an intimate window into her struggle with cancer. Week by week, month by month, and treatment by treatment, she shares her journey and experiences in group e-mails to family and friends with wit, fear, stubbornness, faith, and candor. After recounting the procedures, tests, and general medical things she experienced, she ends each e-mail with several wonderful quotes, which offer as much solace to her as they would to those reading her e-mails. Seriously-Cancer? I Do Not Have Time for This! tells a true story of inspiration for anyone who is facing illness or difficulties in life. "Lauren is a real trooper who viewed her cancer treatment in such a positive, relatable, inspiring, and hilarious perspective. ...This book is a must read for all young adults battling cancer, for healthcare providers, and for families and friends supporting their loved ones during their treatment." -Brenda Muriera-Noggy, senior research nurse, Leukemia/Lymphoma Department, Division of Pediatrics, UT MD Anderson Cancer Center 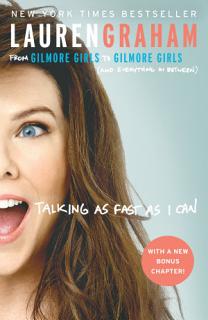 Talking as Fast as I Can

GET BOOK Talking as Fast as I Can Book Description :

NEW YORK TIMES BESTSELLER • In this collection of personal essays, the beloved star of Gilmore Girls and Parenthood reveals stories about life, love, and working as a woman in Hollywood—along with behind-the-scenes dispatches from the set of the new Gilmore Girls, where she plays the fast-talking Lorelai Gilmore once again. With a new bonus chapter In Talking as Fast as I Can, Lauren Graham hits pause for a moment and looks back on her life, sharing laugh-out-loud stories about growing up, starting out as an actress, and, years later, sitting in her trailer on the Parenthood set and asking herself, “Did you, um, make it?” She opens up about the challenges of being single in Hollywood (“Strangers were worried about me; that’s how long I was single!”), the time she was asked to audition her butt for a role, and her experience being a judge on Project Runway (“It’s like I had a fashion-induced blackout”). In “What It Was Like, Part One,” Graham sits down for an epic Gilmore Girls marathon and reflects on being cast as the fast-talking Lorelai Gilmore. The essay “What It Was Like, Part Two” reveals how it felt to pick up the role again nine years later, and what doing so has meant to her. Some more things you will learn about Lauren: She once tried to go vegan just to bond with Ellen DeGeneres, she’s aware that meeting guys at awards shows has its pitfalls (“If you’re meeting someone for the first time after three hours of hair, makeup, and styling, you’ve already set the bar too high”), and she’s a card-carrying REI shopper (“My bungee cords now earn points!”). Including photos and excerpts from the diary Graham kept during the filming of the recent Gilmore Girls: A Year in the Life, this book is like a cozy night in, catching up with your best friend, laughing and swapping stories, and—of course—talking as fast as you can.

GET BOOK The Perfect Us Book Description : 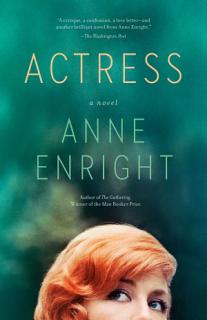 Man Booker Prize-winner and bestselling author Anne Enright's latest--a brilliant and moving novel about fame, sexual power, and a daughter's search to understand her mother's hidden truths. This is the story of Irish theatre legend, Katherine O'Dell, as written by her daughter Norah. It tells of early stardom in Hollywood, of highs and lows on the stages of Dublin and London's West End. Katherine's life is a grand performance, with young Norah watching from the wings. But this romance between mother and daughter cannot survive Katherine's past, or the world's damage. As Norah uncovers her mother's secrets, she acquires a few of her own. Then, fame turns to infamy when Katherine decides to commit a bizarre crime. Actress is about a daughter's search for the truth: the dark secret in the bright star, and what drove Katherine finally mad. Brilliantly capturing the glamour of post-war America and the shabbiness of 1970s Dublin, Actress is an intensely moving, disturbing novel about mothers and daughters and the men in their lives. A scintillating examination of the corrosive nature of celebrity, it is also a sad and triumphant tale of freedom from bad love, and from the avid gaze of the crowd. 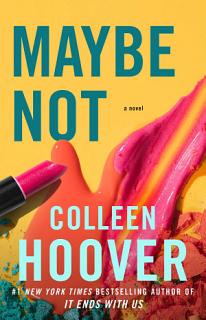 GET BOOK Maybe Not Book Description :

When Warren becomes roommates with cold and calculating Bridgette, tempers flare, but Warren is intent on turning her passionate antagonism into passionate love.

What is more important? Friendship, loyalty or love? Colleen Hoover and Griffin Peterson collaborate once again to bring fans of Maybe Someday back into the musical world of Ridge Lawson and Sydney Blake. And Maggie. And Warren and Bridgette.This full length novel is a follow-up to the New York Times bestselling novel, Maybe Someday. For the best reading experience, Maybe Now should be read after Maybe Someday and the spin-off novella, Maybe Not. However, Maybe Now can also be read immediately following Maybe Someday.