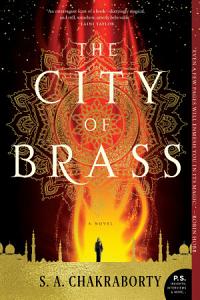 NAMED ONE OF THE BEST BOOKS OF THE YEAR BY Library Journal | Vulture | The Verge | SYFYWire Step into The City of Brass, the spellbinding debut from S. A. Chakraborty perfect for fans of The Golem and the Jinni, The Grace of Kings, and Uprooted, in which the future of a magical Middle Eastern kingdom rests in the hands of a clever and defiant young con artist with miraculous healing gifts. On the streets of eighteenth-century Cairo, Nahri is a con woman of unsurpassed skill. She makes her living swindling Ottoman nobles, hoping to one day earn enough to change her fortunes. But when Nahri accidentally summons Dara, an equally sly, darkly mysterious djinn warrior, during one of her cons, she learns that even the cleverest of schemes can have deadly consequences. Forced to flee Cairo, Dara and Nahri journey together across hot, windswept sands teeming with creatures of fire and rivers where the mythical marid sleep, past ruins of once-magnificent human metropolises and mountains where the circling birds of prey are more than what they seem, to Daevabad, the legendary city of brass. It’s a city steeped in magic and fire, where blood can be as dangerous as any spell; a city where old resentments run deep and the royal court rules with a tenuous grip; a city to which Nahri is irrevocably bound—and where her very presence threatens to ignite a war that has been simmering for centuries. *Finalist for the World Fantasy Award: Best Novel *Nominated for the Locus Award: Best First Novel *Finalist for the British Fantasy Award: Best Newcomer Featuring a stepback and extra content including a bonus scene and an excerpt from The Kingdom of Copper. 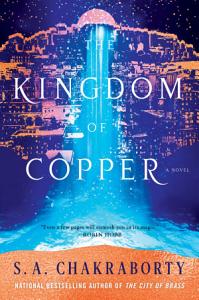 The Kingdom of Copper

GET BOOK The Kingdom of Copper Book Description :

S. A. Chakraborty continues the sweeping adventure begun in The City of Brass—"the best adult fantasy I’ve read since The Name of the Wind" (#1 New York Times bestselling author Sabaa Tahir)—conjuring a world where djinn summon flames with the snap of a finger and waters run deep with old magic; where blood can be dangerous as any spell, and a clever con artist from Cairo will alter the fate of a kingdom. Nahri’s life changed forever the moment she accidentally summoned Dara, a formidable, mysterious djinn, during one of her schemes. Whisked from her home in Cairo, she was thrust into the dazzling royal court of Daevabad—and quickly discovered she would need all her grifter instincts to survive there. Now, with Daevabad entrenched in the dark aftermath of a devastating battle, Nahri must forge a new path for herself. But even as she embraces her heritage and the power it holds, she knows she’s been trapped in a gilded cage, watched by a king who rules from the throne that once belonged to her family—and one misstep will doom her tribe.. Meanwhile, Ali has been exiled for daring to defy his father. Hunted by assassins, adrift on the unforgiving copper sands of his ancestral land, he is forced to rely on the frightening abilities the marid—the unpredictable water spirits—have gifted him. But in doing so, he threatens to unearth a terrible secret his family has long kept buried. And as a new century approaches and the djinn gather within Daevabad's towering brass walls for celebrations, a threat brews unseen in the desolate north. It’s a force that would bring a storm of fire straight to the city’s gates . . . and one that seeks the aid of a warrior trapped between worlds, torn between a violent duty he can never escape and a peace he fears he will never deserve. 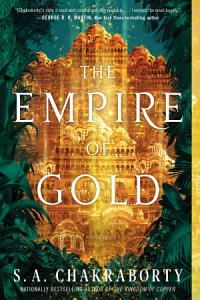 The Empire of Gold

GET BOOK The Empire of Gold Book Description :

“No series since George R.R. Martin’s A Song of Ice and Fire has quite captured both palace intrigue and the way that tribal infighting and war hurt the vulnerable the most.” —Paste Magazine The final chapter in the bestselling, critically acclaimed Daevabad Trilogy, in which a con-woman and an idealistic djinn prince join forces to save a magical kingdom from a devastating civil war. Daevabad has fallen. After a brutal conquest stripped the city of its magic, Nahid leader Banu Manizheh and her resurrected commander, Dara, must try to repair their fraying alliance and stabilize a fractious, warring people. But the bloodletting and loss of his beloved Nahri have unleashed the worst demons of Dara’s dark past. To vanquish them, he must face some ugly truths about his history and put himself at the mercy of those he once considered enemies. Having narrowly escaped their murderous families and Daevabad’s deadly politics, Nahri and Ali, now safe in Cairo, face difficult choices of their own. While Nahri finds peace in the old rhythms and familiar comforts of her human home, she is haunted by the knowledge that the loved ones she left behind and the people who considered her a savior are at the mercy of a new tyrant. Ali, too, cannot help but look back, and is determined to return to rescue his city and the family that remains. Seeking support in his mother’s homeland, he discovers that his connection to the marid goes far deeper than expected and threatens not only his relationship with Nahri, but his very faith. As peace grows more elusive and old players return, Nahri, Ali, and Dara come to understand that in order to remake the world, they may need to fight those they once loved . . . and take a stand for those they once hurt. 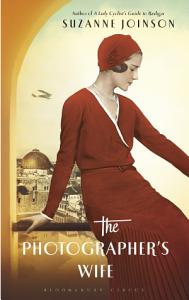 Jerusalem, 1920: in an already fractured city, eleven-year-old Prudence feels the tension rising as her architect father launches an ambitious – and wildly eccentric – plan to redesign the Holy City by importing English parks to the desert. Prue, known as the 'little witness', eavesdrops underneath the tables of tearooms and behind the curtains of the dance-halls of the city's elite, watching everything but rarely being watched herself. Around her, British colonials, exiled Armenians and German officials rub shoulders as they line up the pieces in a political game: a game destined to lead to disaster. When Prue's father employs a British pilot, William Harrington, to take aerial photographs of the city, Prue is uncomfortably aware of the attraction that sparks between him and Eleanora, the English wife of a famous Jerusalem photographer. And, after Harrington learns that Eleanora's husband is a nationalist, intent on removing the British, those sparks are fanned dangerously into a flame. Years later, in 1937, Prue is an artist living a reclusive life by the sea with her young son, when Harrington pays her a surprise visit. What he reveals unravels her world, and she must follow the threads that lead her back to secrets long-ago buried in Jerusalem. The Photographer's Wife is a powerful story of betrayal: between father and daughter, between husband and wife, and between nations and people, set in the complex period between the two world wars. 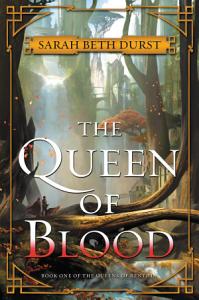 The Queen of Blood

GET BOOK The Queen of Blood Book Description :

A Tor.com Best of 2016 pick! Set in the magical world of Renthia, The Queen of Blood is Sarah Beth Durst’s ambitious entry into adult epic fantasy. With the danger of Peter Brett’s The Warded Man, heart of Naomi Novik’s Uprooted, and lyricism of Patrick Rothfuss’ The Name of the Wind, this is the first chapter in a series destined to be a classic. Everything has a spirit: the willow tree with leaves that kiss the pond, the stream that feeds the river, the wind that exhales fresh snow . . . But the spirits that reside within this land want to rid it of all humans. One woman stands between these malevolent spirits and the end of humankind: the queen. She alone has the magical power to prevent the spirits from destroying every man, woman, and child. But queens are still just human, and no matter how strong or good, the threat of danger always looms. With the position so precarious, young women are chosen to train as heirs. Daleina, a seemingly quiet academy student, is under no illusions as to her claim to the throne, but simply wants to right the wrongs that have befallen the land. Ven, a disgraced champion, has spent his exile secretly fighting against the growing number of spirit attacks. Joining forces, these daring partners embark on a treacherous quest to find the source of the spirits’ restlessness—a journey that will test their courage and trust, and force them to stand against both enemies and friends to save their land . . . before it’s bathed in blood. 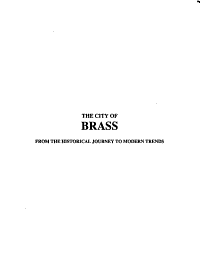 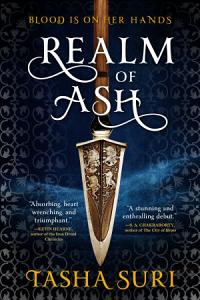 Some believe the Ambhan Empire is cursed. But Arwa doesn't simply believe it - she knows it's true. Widowed by the infamous, unnatural massacre at Darez Fort, Arwa was saved only by the strangeness of her blood - a strangeness she had been taught all her life to suppress. She offers up her blood and service to the imperial family and makes common cause with a disgraced, illegitimate prince who has turned to forbidden occult arts to find a cure to the darkness hanging over the Empire. Using the power in Arwa's blood, they seek answers in the realm of ash: a land where mortals can seek the ghostly echoes of their ancestors' dreams. But the Emperor's health is failing, and a terrible war of succession hovers on the horizon, not just for the imperial throne, but for the magic underpinning Empire itself. To save the Empire, Arwa and the prince must walk the bloody path of their shared past, through the realm of ash and into the desert, where the cause of the Empire's suffering-and its only chance of salvation - lie in wait. But what they find there calls into question everything they've ever valued . . . and whether they want to save the Empire at all. 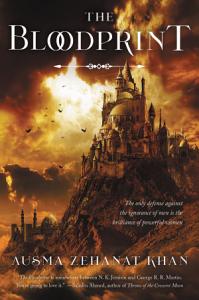 GET BOOK The Bloodprint Book Description :

The author of the acclaimed mystery The Unquiet Dead delivers her first fantasy novel—the opening installment in a thrilling quartet—a tale of religion, oppression, and political intrigue that radiates with heroism, wonder, and hope. A dark power called the Talisman, born of ignorance and persecution, has risen in the land. Led by a man known only as the One-Eyed Preacher, it is a cruel and terrifying movement bent on world domination—a superstitious patriarchy that suppresses knowledge and subjugates women. And it is growing. But there are those who fight the Talisman’s spread, including the Companions of Hira, a diverse group of influential women whose power derives from the Claim—the magic inherent in the words of a sacred scripture. Foremost among them is Arian and her fellow warrior, Sinnia, skilled fighters who are knowledgeable in the Claim. This daring pair have long stalked Talisman slave-chains, searching for clues and weapons to help them battle their enemy’s oppressive ways. Now they may have discovered a miraculous symbol of hope that can destroy the One-Eyed Preacher and his fervid followers: the Bloodprint, a dangerous text the Talisman has tried to erase from the world. Finding the Bloodprint promises to be their most perilous undertaking yet, an arduous journey that will lead them deep into Talisman territory. Though they will be helped by allies—a loyal boy they freed from slavery and a man that used to be both Arian’s confidant and sword master—Arian and Sinnia know that this mission may well be their last.