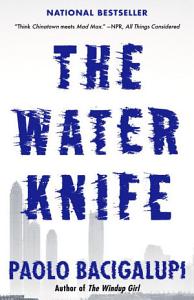 WATER IS POWER In the near future, the Colorado River has dwindled to a trickle. Detective, assassin, and spy, Angel Velasquez “cuts” water for the Southern Nevada Water Authority, ensuring that its lush arcology developments can bloom in Las Vegas. When rumors of a game-changing water source surface in Phoenix, Angel is sent south, hunting for answers that seem to evaporate as the heat index soars and the landscape becomes more and more oppressive. There, he encounters Lucy Monroe, a hardened journalist with her own agenda, and Maria Villarosa, a young Texas migrant, who dreams of escaping north. As bodies begin to pile up, the three find themselves pawns in a game far bigger and more corrupt than they could have imagined, and when water is more valuable than gold, alliances shift like sand, and the only truth in the desert is that someone will have to bleed if anyone hopes to drink. 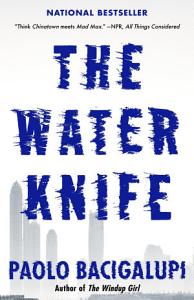 Decimated by drought, Nevada and Arizona skirmish over dwindling shares of the Colorado River, while California watches, waiting. Into the fray steps Las Vegas water knife Angel Velasquez, who "cuts" water for the Southern Nevada Water Authority and its boss, Catherine Case, ensuring that her lush, luxurious arcology developments can bloom in the desert and that anyone who challenges her is left in the gutted-suburban dust. He becomes a pawn in a game far bigger, more corrupt, and dirtier than he could have imagined. 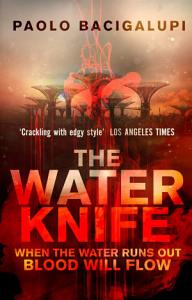 From the international bestselling author of the Hugo and Nebula award-winning The Windup Girl, comes an electrifying thriller set in a world on the edge of collapse. WATER IS POWER The American Southwest has been decimated by drought, Nevada and Arizona skirmish over dwindling shares of the Colorado River, while California watches. When rumors of a game-changing water source surface in Phoenix, Las Vegas water knife Angel Velasquez is sent to investigate. With a wallet full of identities and a tricked-out Tesla, Angel arrows south, hunting for answers that seem to evaporate as the heat index soars and the landscape becomes more and more oppressive. There, Angel encounters Lucy Monroe, a hardened journalist who knows far more about Phoenix's water secrets than she admits, and Maria Villarosa, a young Texas migrant who dreams of escaping north to those places where water still falls from the sky. As bodies begin to pile up and bullets start flying, the three find themselves pawns in a game far bigger, more corrupt, and dirtier than any of them could have imagined. With Phoenix teetering on the verge of collapse and time running out, their only hope for survival rests in one another's hands. But when water is more valuable than gold, alliances shift like sand, and the only truth in the desert is that someone will have to bleed if anyone hopes to drink. 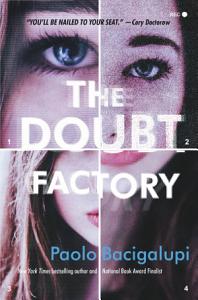 In this page-turning contemporary thriller, National Book Award Finalist, Printz Award winner, and New York Times bestselling author Paolo Bacigalupi explores the timely issue of how public information is distorted for monetary gain, and how those who exploit it must be stopped. Everything Alix knows about her life is a lie. At least that's what a mysterious young man who's stalking her keeps saying. But then she begins investigating the disturbing claims he makes against her father. Could her dad really be at the helm of a firm that distorts the truth and covers up wrongdoing by hugely profitable corporations that have allowed innocent victims to die? Is it possible that her father is the bad guy, and that the undeniably alluring criminal who calls himself Moses--and his radical band of teen activists--is right? Alix has to make a choice, and time is running out, but can she truly risk everything and blow the whistle on the man who loves her and raised her? 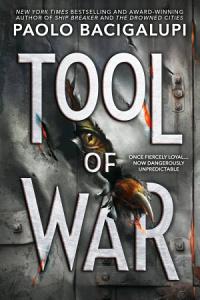 Set in a dark future devastated by climate change, Tool of War is the third book in a major adventure series by a bestselling and award-winning science fiction author and starring the most provocative character from the acclaimed novels Ship Breaker and The Drowned Cities. In this gripping, eerily prescient sci-fi thriller that Kirkus described as "masterful," Tool--a half-man/half-beast designed for combat--proves himself capable of so much more than his creators had ever dreamed. He has gone rogue from his pack of bioengineered "augments" and emerged a victorious leader of a pack of human soldier boys. But he is hunted relentlessly by someone determined to destroy him, who knows an alarming secret: Tool has found the way to resist his genetically ingrained impulses of submission and loyalty toward his masters... The time is coming when Tool will embark on an all-out war against those who have enslaved him. From one of science fiction's undisputed masters comes a riveting and all-too-timely page-turner that explores the intricate relationships connecting hunter and prey, master and enslaved, human and monster. "Suzanne Collins may have put dystopian literature on the YA map with 'The Hunger Games'...but Bacigalupi is one of the genre's masters, employing inventively terrifying details in equally imaginative story lines." --Los Angeles Times

GET BOOK After the End Book Description :

Offers a collection of short stories about post-apocalyptic survival from such authors as Kage Baker, Cory Doctorow, Paul Tremblay, and Blake Butler. 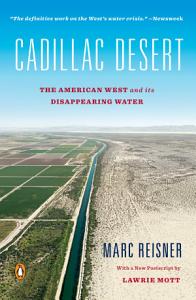 "The definitive work on the West's water crisis." --Newsweek The story of the American West is the story of a relentless quest for a precious resource: water. It is a tale of rivers diverted and dammed, of political corruption and intrigue, of billion-dollar battles over water rights, of ecological and economic disaster. In his landmark book, Cadillac Desert, Marc Reisner writes of the earliest settlers, lured by the promise of paradise, and of the ruthless tactics employed by Los Angeles politicians and business interests to ensure the city's growth. He documents the bitter rivalry between two government giants, the Bureau of Reclamation and the U.S. Army Corps of Engineers, in the competition to transform the West. Based on more than a decade of research, Cadillac Desert is a stunning expose and a dramatic, intriguing history of the creation of an Eden--an Eden that may only be a mirage. From the Trade Paperback edition. 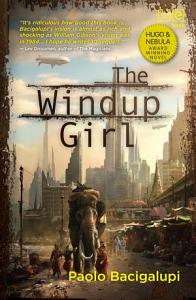 Anderson Lake is a company man, AgriGen's Calorie Man in Thailand. Under cover as a factory manager, Anderson combs Bangkok's street markets in search of foodstuffs thought to be extinct, hoping to reap the bounty of history's lost calories. There, he encounters Emiko... Emiko is the Windup Girl, a strange and beautiful creature. One of the New People, Emiko is not human; instead, she is an engineered being, creche-grown and programmed to satisfy the decadent whims of a Kyoto businessman, but now abandoned to the streets of Bangkok. Regarded as soulless beings by some, devils by others, New People are slaves, soldiers, and toys of the rich in a chilling near future in which calorie companies rule the world, the oil age has passed, and the side effects of bio-engineered plagues run rampant across the globe. What happens when calories become currency? What happens when bio-terrorism becomes a tool for corporate profits, when bio-terrorism's genetic drift forces mankind to the cusp of post-human evolution? 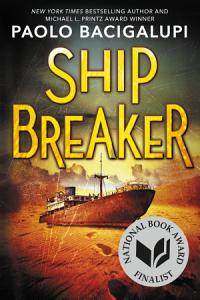 This thrilling bestseller and National Book Award Finalist is a gritty, high-stakes adventure of a teenage boy faced with conflicting loyalties, set in a dark future America devastated by the forces of climate change. In America's flooded Gulf Coast region, oil is scarce, but loyalty is scarcer. Grounded oil tankers are being broken down for parts by crews of young people. Nailer, a teenage boy, works the light crew, scavenging for copper wiring just to make quota--and hopefully live to see another day. But when, by luck or by chance, he discovers an exquisite clipper ship beached during a recent hurricane, Nailer faces the most important decision of his life: Strip the ship for all it's worth or rescue its lone survivor, a beautiful and wealthy girl who could lead him to a better life.... In this powerful novel, Hugo and Nebula Award winning author Paolo Bacigalupi delivers a fast-paced adventure set in the vivid and raw, uncertain future of his companion novels The Drowned Cities and Tool of War. "Suzanne Collins may have put dystopian literature on the YA map with The Hunger Games...but Bacigalupi is one of the genre's masters, employing inventively terrifying details in equally imaginative story lines." --Los Angeles Times A New York Times Bestseller A Michael L. Printz Award Winner A National Book Award Finalist A VOYA 2010 Top Shelf Fiction for Middle School Readers Book A Rolling Stone 40 Best YA Novels Book 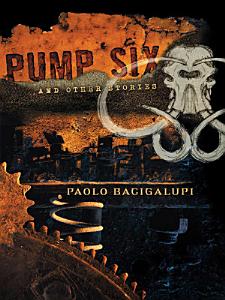 Pump Six and Other Stories

GET BOOK Pump Six and Other Stories Book Description :

Paolo Bacigalupi's debut collection demonstrates the power and reach of the science fiction short story. Social criticism, political parable, and environmental advocacy lie at the center of Paolo's work. Each of the stories herein is at once a warning, and a celebration of the tragic comedy of the human experience. The eleven stories in Pump Six represent the best Paolo's work, including the Hugo nominee "Yellow Card Man," the nebula and Hugo nominated story "The People of Sand and Slag," and the Sturgeon Award-winning story "The Calorie Man."